Mahbubabad (Warangal): Following innovative changes in housing and decoration, one after another roofing tiles factories are being closed throughout Telangana rendering about 4,000 workers without livelihood.

The tile industry has seen its peak days when the then AP Government used to purchase roofing tiles for the construction of houses for the poor. A number of factories were established in 1978 in East Godavari, Krishna, Khammam, Warangal, Medak districts.

On the highway between Mahabubabad –Illendu, 24 roofing tile factories were established. Lakshmi Tiles factory was established in Bayyaram mandal since the clay available in the irrigation tank at Bayyaram was suitable for tile production.

During 1980, 80 per cent of production was used for constructing houses for weaker sections. However, by 1996, the state government took a decision to construct concrete slabs for housing giving a big blow to the tiles industry. Several industries were closed when huge stocks remained unsold.

Some of the industries changed the designs and started producing designer tiles for decorating the buildings. Chiefly, industries in Khammam and Warangal districts started exporting tiles to Kerala, Karnataka and Tamil Nadu states.

Those state governments while approving construction of houses set a condition that the roofs must be decorated with tiles to absorb the heat consequently reducing the power consumption. There was again demand for decorative tiles and the industries heaved a sigh of relief.

But their happiness was short-lived. The innovative digital plates have replaced the tiles and naturally, various state governments also relaxed the rules while decorating the roofs.

Mainly, the decorate tiles manufactured in Gujarat are cheaper and more aesthetic attracting the consumers to use them.

Now the future of tiles factories are back to square one. At least 4,000 workers face the threat of losing of livelihood.  Unless the Telangana State Government imposes a rule to use the decorative tiles while sanctioning building plans, there every danger these tile factories may be closed forever.

Posted by GKM Roofing Chennai at 09:02

When it comes time to replace your roof, metal roofing is always a viable option. It is ideal for homes that have either a flat or steep roofline and it offers durability that is hard to match. When you are choosing between metal roofing and other types, you should be fully aware of what you are paying for. 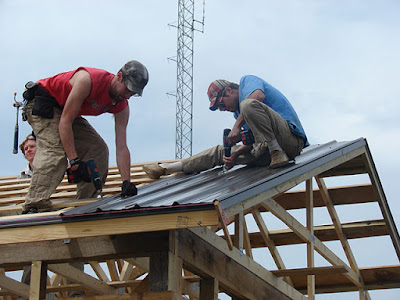 Before you decide to buy a metal roof, you should consult with a Colorado Springs roofing expert, but here are some of the basics surrounding metal roof systems and the advantages or disadvantages that you can expect:


One of the main benefits surrounding metal roofing is the amount of options that you have to choose from. Tin, zinc, aluminum, copper and galvanized steel are all metal roofing options that you can select from. This allows you to customize your roof based on the durability, style and price that you are looking to obtain. Most other roofing options do not offer so much variety.


The main factor that homeowners consider when looking for a roofing option involves longevity and durability. You want something that will stand the test of time and last. Metal roofs have been found to last between 40 and 70 years, but it depends on the material that you choose to make your metal from. This is much longer than traditional asphalt roofing that lasts only from 10 to 20 years. This makes metal roofing the better option for homeowners that take longevity into consideration. Metal roofs also can withstand strong winds and is a resilient roofing type. You will not have to worry about maintenance and upkeep if you go the metal roofing route.


A metal roof system is an energy efficient roofing type, because it reflects solar heat and can cut back on cooling costs immensely. You can also rest assured knowing that metal roofing will not go up into flames in the event of a lightening strike.


Metal roofing is known for offering many benefits, but there are a couple disadvantages that are connected to this roofing type. It is not the most affordable roofing option on the market and it is much more expensive than traditional asphalt roofing. However, it should be noted that metal roofs lasts longer and the larger initial investment is usually worth the added expense. You should also be warned that metal roofs can be quite noisy in the event of heavy rain or hail compared to architectural roof shingles or tile shingles.

Email ThisBlogThis!Share to TwitterShare to FacebookShare to Pinterest
Location: India

We are one of the finest Organisation of experts brings aesthetic & functional roof solutions in and around Chennai With a strong, proven track record, we have played a pioneering role in every tasks. if you are looking for Metal, Steel, Commercial & Industrial roof services in Chennai. We are here to assist you make your work easy handled and delivered projects exceeding the expectations of our customers.
Our strong work ethics, high quality manpower and stellar management are pivotal to our functioning and customer delight is our life breath. Our competitive prices are sure to win you over as our roofing services and solutions are guaranteed to give you excellent value for money. We plan on expanding all over TamilNadu and pan India in the near future. We do services throughout Chennai. We are the leading roofing contractors in Chennai with nimble-fingered staff members with OnTime product delivery.

Posted by GKM Roofing Chennai at 02:04